Advances in Aquaculture and Fisheries Management

Bacteria diseases are widespread and can be of particular importance in fish farming. Bacteria exist as micro flora in water until certain environmental conditions such as poor water quality occur, which could impose a stress on fish, thereby making them vulnerable to infection, most especially by pathogenic bacteria. This study was carried out to assess and compare the bacteria diversities and population in Clarias gariepinus, Sarotherodon melanotheron and Oreochromis niloticus, in the three grow out ponds of the aquaculture unit of the Department of Marine Science and Lagoon Front of the University of Lagos. It also aims at determining their public health significance. The experiment was carried out between May-September 2013. Water samples were collected from the three grows out ponds in the Department of Marine Sciences and from Lagos lagoon Front of the University of Lagos. In each case, water samples were analysed for the possible indicator organisms of faecal and industrial pollutions such as Escherichia coli, Staphylococcus aureus, Salmonella spp., feacal streptococcus, Vibrio spp., and Clostridium spp. From the result obtained, all the bacteria listed above were first seen as common bacteria in all the samples of water analysed. Further studies (biochemical tests) also reveal bacteria such as Klebsiella spp., Proteus spp., Enterobacter aerogenes, Citrobacter spp. and Pseudomonas aeroginosa. Moreover, the same indicator bacteria seen in water samples were also detected in the different body parts (flesh, mouth, gill and gut) of each of the fish species analysed, both from the Departmental ponds and Lagoon front, except Clostridium perfringes (C. welchii), Vibrio cholera and Salmonella typii which were found in the gut of those fish species from the departmental ponds A-C and in the mouth, gill and gut of the fishes from lagoon front. The population of each of these bacteria was found to be highest in the gut region, followed by the gill, the mouth and least in the flesh. There was no significant difference in the population of each of the bacterial across pond water (P>0.05). Same is the case with each bacteria analysed across body parts of the fish species (skin, mouth, gill and gut) in the Departmental ponds, that is, no significant difference (P>0.05). But, when compared with the lagoon front (both for water and fish samples) the difference was highly significant (P<0.05). None of the population of the bacteria in the ponds exceeds the limit for human consumption. The bacteria load in the lagoon fish (skin, mouth, gill and gut) was higher than the recommended limit for human consumption. Therefore, they are not fit for consumption most especially samples from the mouth, gill and gut, except effective processing treatment is employed before consumption. Due policy should also be taken by the government to curtail the tradition of indiscriminate discharge of untreated effluent into the lagoon. 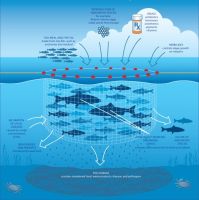 Advances in Aquaculture and Fisheries Management