For the last centuries, marked land use changes have taken place throughout the Mediterranean region. These changes have a great impact on plant diversity, variations of which can affect in return ecosystem functioning. This is particularly true for sweet chestnut ( Castanea sativa Mill.) stands (groves or coppices) that have been more or less abandoned since the end of the last century. Thus, our objective was to analyse the consequences of various management types on plant species diversity, or to analyse if the land use changes may affect the diversity of plant species in chestnut areas of Southern Europe: in chestnut stands of the Honfría forest, located in the South of Salamanca province in Spain, and in the Cévennes in Southern France. Results indicate that plant species diversity is higher in groves than in coppice stands. Cultivated groves were generally characterized by small heliophilous therophytes, and abandoned groves by hemicryptophytes with anemochorous dispersal mode and chamaephytes. Coppice stands were characterized more particularly by phanerophytes with zoochorous dispersal mode. Thus, plant species diversity differs according to management types. The 17% of common species were found between the two Mediterranean areas studied. This difference can be explained by different ecological conditions (elevation, soil type), different management types (grove, coppice stand), and different stand characteristics (shoot density, diameter at breast height). The cultivated grove plots were very different from the other stands that constituted one sub-group. In the Honfría forest, the values of Jaccard index indicated that the cultivated grove had a plant species composition very different from the other stands. In the Cévennes, the lowest values of the Jaccard index were also found between the cultivated grove and the other stands. One solution could be to maintain a landscape mosaic constituted of diverse chestnut stands modified by human activities (chestnut groves, abandoned chestnut groves and chestnut coppice stands). This could allow the enhancement of the high regional plant diversity. 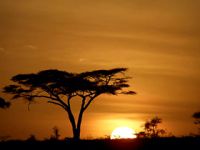