International Journal of Bacteriology and Mycology

Geranylgeranyl pyrophosphate synthase (GGDPS, EC: 2.5.1.29) catalyzes the biosynthesis of 20-carbon geranylgeranyl pyrophosphate (GGDP), which is a key precursor for ginkgolides biosynthesis. In order to investigate the role of GGDP synthase in ginkgolides biosynthesis, we cloned, characterized and functionally expressed the GGDP synthase gene from Ginkgo biloba. The genomic DNA fragment of the GGDPS gene of G. biloba (designated GbGGDPS GenBank accession number EF646377) was 2135 bp in length containing an 1176-bp open reading frame (ORF) that encoded a 391-amino acid polypeptide. Comparative analysis showed that GbGGDPS had a high similarity to other plant GGDPSs. Bioinformatic analysis showed that GbGGDPS was an intron-free gene and its deduced polypeptide contained all the five conserved domains and functional aspartate-rich motifs of the polyprenyltransferases. By constructing the phylogenetic tree of plant GGDPSs, it was found that plant-derived GGDPSs could be divided into two classes, angiosperm and gymnosperm classes, which might have evolved in parallel from the same ancestor. The homology-based structural modeling showed that GbGGDPS has the typical structure of GGDPS. The tissue expression profiles of GbGGDPS indicated that it could express in roots, stems, leaves, peshes and fruits but at different levels. The highest expression level of GbGGDPS was found in roots and peshes while the lowest expression level of GbGGDPS was found in leaves. Interestingly, it was found that GbGGDPS had a higher expression level in the treatment of methyl jasmonate. Finally, the coding sequence of GbGGDPS was functionally expressed in Escherica coli in which the -carotene pathway was reconstructed by genetic complementation, and the transgenic E. coli showed to have an activity of GGDP synthase. 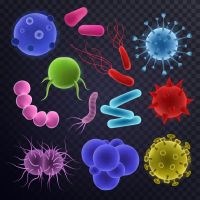 International Journal of Bacteriology and Mycology