Consumer awareness and attitudes toward GM foods in Kenya

A survey of 604 consumers was conducted in Nairobi, Kenya, in November and December 2003, at three points of sale (supermarkets, kiosks, and posho mills) to determine consumer awareness and attitudes towards genetically modified (GM) foods. Above a third (38%) of the respondents were aware of GM crops, mostly from newspapers, television and radio. Others had learned about GM crops at school. Newspapers and television were more important to higher-income and more educated consumers. Consumers acknowledged the technology’s potential positive impacts, with more than 80% agreeing that it increases productivity. Sixty-eight percent said they would buy GM maize meal at the same price as their favorite brands, although many had concerns; half of the respondents feared that GM technology could lead to a loss of biodiversity and affect non -target insects; while more than one- third (37%) had concerns about the effects of GM food on human health. We conclude that GM technology has a role to play in food security in Kenya. However, consumers need more information about the technology, which can be provided through established sources of information. Finally, consumer attitudes should be studied regularly, and the survey population broadened to include rural consumers. 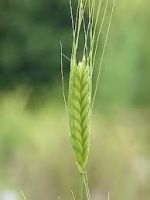